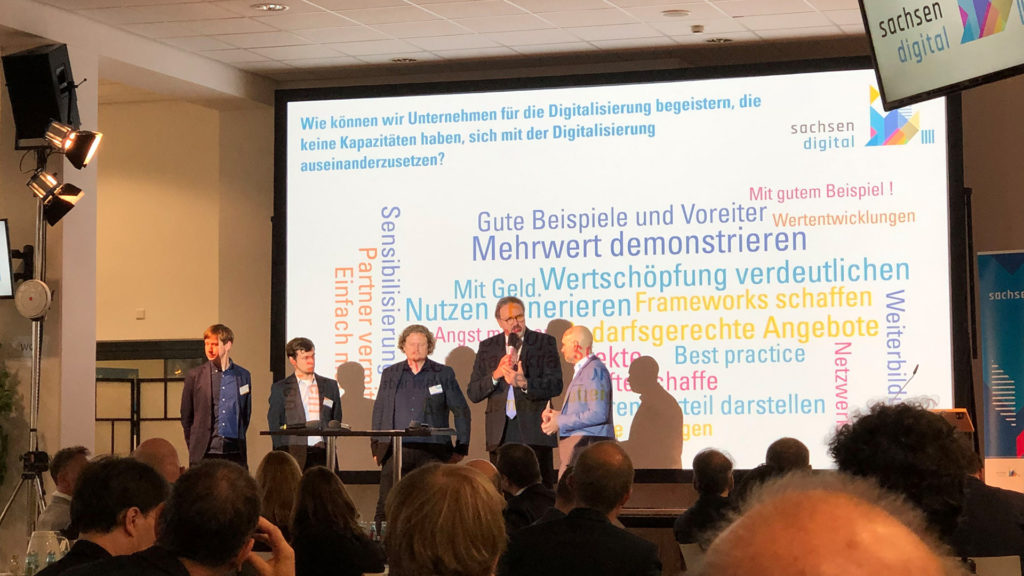 About 200 participants met for the third time in the stadium Chemnitz for the Forum Sachsen Digital. Representatives from politics, business and science met to discuss digital innovations for production and logistics, administration, health, media education, tourism and culture, as well as the social implications of artificial intelligence, technologies such as blockchain, sensitising entrepreneurs or digitisation and urban development.

Deputy Prime Minister Martin Dulig opened the events with very clear words that Germany is on the right track in the area of digitisation and start-ups, but still has a lot of catching up to do in global competition. There had to be a rethinking in all areas, a revolution in digitisation that already begins with the educational path and must find its way into all economic areas. It is not a question of reducing jobs, but rather of supporting the workforce intelligently through digital systems and thus countering the shortage of skilled workers to a certain extent. Above all, however, ethical aspects such as the possibility of accessing urban surveillance cameras through apps must be questioned in order not to allow digitalisation to get out of hand.

Mrs. Dorothee Bär, Minister of State at the Federal Chancellor’s Office and Federal Government Commissioner for Digitisation, also addressed clear words to the federal states, municipalities and industry that digitisation must be seen as an opportunity and not as a duty. A rethinking in the municipalities and states is necessary, a thought like Open Source is especially necessary in the states, that not every state starts to find its own solution, where a solution is already available. In the economy also systems are developed which can find application with country and municipalities.

René Schröter represented the important part of the construction industry in the area of theme islands, which received little attention in the invitation of the participants. In the workshop Digital Planning, Construction and Operation with BIM (Building Information Modeling) – where does Saxony stand? it was constructively discussed which hurdles still exist and that a general application requires many further clarifications. A competence group like buildingSMART e.V. is the right way to define a system for Open BIM and to enable small engineering offices to work with BIM in general.

An interesting format could be discussed with the Chamber of Handicrafts Dresden to bring the innovations closer to the building industry, in which BAPP can also be integrated.